The Operational Oceanography is an evolution of the traditional application of oceanography. We make forecasts of the sea (waves, currents, physical parameters) also oriented to the management of emergencies or in response to also temporary needs of different users. This is done through the implementation of numerical prediction models at different spatial and time resolutions, but also by the monitoring, the processing and the dissemination of information.

Group’s activity mainly focuses on the implementation and use of marine numerical models nested and based on different numerical methods, finite differences and finite elements, which are used both at the sub-regional scale (the Strait of Sicily and the seas around Sardinia – western Mediterranean, both visible on the site www.seaforecast.cnr.it) and local (areas and coastal lagoons) to provide an innovative approach to the management of the marine environment and its resources. The scientific research and activities include the forecast of the circulation and the wave field, the investigation of the interactions between wind-waves and sea currents, sediments transport and ecological modeling. In particular, in order to investigate the impact of pollutants released into the marine environment, our institute can provide their future path both offshore and in coastal areas thanks to numerical models and operating grafted finite differences and finite elements. The proposed approach, based on integrated modeling techniques, takes into account the main meteo-marine forcings that affect the transport of pollutants such as ocean currents, the wind-wave field, wind direction, etc.. These processes are numerically investigated at different spatial scales and resolutions ranging from a few kilometers in the open sea at few meters in coastal areas. 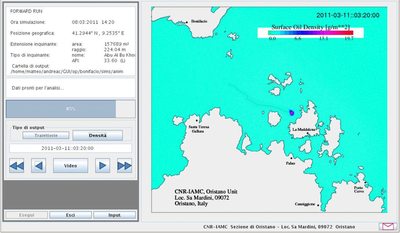 For the management of forecast simulations of a spill of hydrocarbon (oil spill) is possible to use a Graphical User Interface (GUI). The GUI is an easy to use Java program that allows anyone, even without special computer skills to obtain simulations during emergencies, due to the oil spill, and directly interact with an oil spill module through a control panel that also displays realized maps. The GUI guides the user through the creation of a scenario of oil spill who can run the simulation in future or backward mode and then analyze the results of numerical simulations. Results are presented in the form of animations and snapshots. In case of simulations in the future, results will focus on trajectories and density of the oil dispersed in the sea, with the coast impacted marked in red. In the case of backward simulation, the results will focus only on the paths followed by the hydrocarbon back in time.